Little Patuxent Square 10175 Little Patuxent Pkwy Columbia, MD 21044-2655 UNITED STATES
Register Yourself Register Two or More
View Event Attendees
Join ULI Baltimore for a deep dive into the complexities and successes of Columbia’s first large scale Mixed Use project; Little Patuxent Square (LPS).  LPS consists of 160,000 sf of Class A office space, 10,000 sf of prime retail space, 160 Luxury Apartments and 750 parking spaces, all contained under one roof.  Members of the development team will walk attendees through the difficult history of the site and complicated downtown Columbia zoning/permitting process, discuss the design challenges associated with maximizing the one acre site given the 120’ height restriction and the subsurface rock, and explain the financial structure of the project and the intricacies of completing a large scale lease with a Fortune 10 company.  After the presentation and tour of LPS, guests will be invited to take a very short walk to attend a reception and tour at the new, 4.5 Star, Marriott Autograph Collection, Merriweather Lakehouse Hotel located on scenic Lake Kittamaqundi.
Speaker:
David Costello, President, Costello Construction 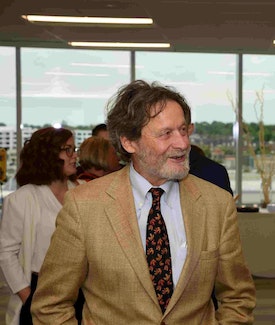 Kingdon Gould, III is the leader of Gould Property Company, a company started in 1952 that has owned many iconic Washington, DC properties including the historic Mayflower Hotel. Under Mr. Gould’s leadership Gould Property has recently completed several important projects like 600 Massachusetts Avenue, a 400,000 sf LEED Platinum office building that is home to Venable, PC’s headquarters and Market Square, one of the first and most prominent mixed use projects in Washington, DC featuring 400,000 sf of office and over 250 luxury residential units. Mr. Gould also heads up Washington, DC’s preeminent name in parking services, PMI. The Gould family is also the owner of Konterra, a 2,000 acre mixed use project under development right between Baltimore and Washington on Route 95.
View in Member Directory Will open in a new window David was born and raised in Howard County, Maryland. While attending Towson University, he worked summers in the construction field as a laborer, then as a mason tender and mason. Upon receiving dual Bachelor of Science degrees in Business Finance and Economics, he began his career as a Project Engineer with a national construction company. His love of construction grew from a vocation to a passion whereby he left the field and worked as a Project Manager for a small, up-and-coming general contractor. Seven years later, he purchased the company and renamed it Costello Construction. Almost 30 years later, the Company is now a $100m, mid-size commercial construction leader known for the successful completion of some of the areas most complicated and intricate projects such as the West Wing Addition of the Baltimore Museum of Art, the Silver Spring Library and National Museum of Health and Medicine. As an active member of the Columbia community, David is passionate about the redevelopment of its downtown. He continues to lend his expertise to the growth and success of Costello Construction as well as local real estate development. His most recent projects include the development of the award-winning, LEED Gold-Certified Little Patuxent Square and the redevelopment of the Sheraton Columbia Town Center Hotel. David is an avid tennis player and golfer and the proud father of two children, who are currently attending American University and George Washington University. He is also a land and environmental preservationist that lives on a 300-acre, historic farm in western Howard County that he and his family permanently preserved through the County’s Agricultural Preservation Program.
View in Member Directory Will open in a new window